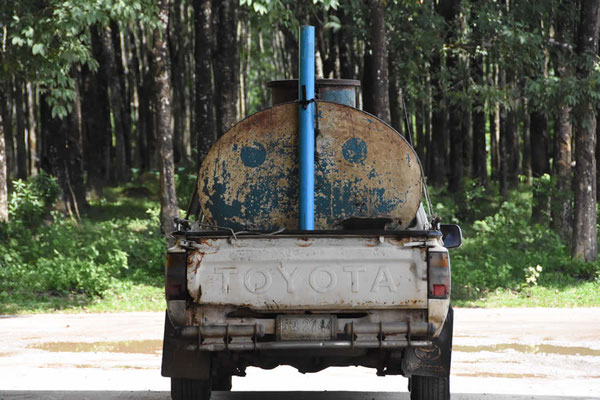 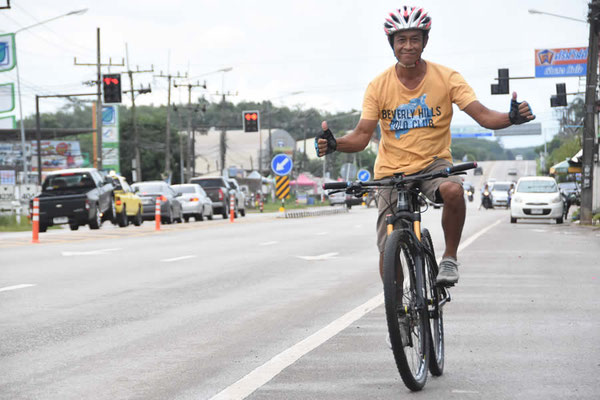 Middlemen usually don’t have a good reputation, but on a recent visit to Thailand, where Fair Rubber Association (FRA) staff researched a new supply chain for Fairly Traded condoms, it became clear that middlemen provide important functions for small rubber farmers and tappers: After harvesting the rubber, they only have to travel a short distance to a local ‘collector’ (= middle-man). Meet Mr Chatree, the collector for some 40 small farmers and tappers. A tapper will on average deliver 35 litres on his moped. Chatree uses an old pickup truck to bring the latex of the group to the next level: A ‘super collector’ – who supplies it to the processors in tanker loads. Mr Chatree’s ‘other vehicle’ is a bicycle: He started competitive cycling at the age of 50, his proudest achievement so far is a 2nd place in a 92 mile race. Unfortunately he won’t be able to buy Fairly Traded bicycle tyres soon – but buyers in Europe can look forward to doing so: On the same trip, the FRA team also looked into a supply chain in Indonesia which will – hopefully soon – lead to Fairly Traded bicycle tyres becoming available, a ‘global 1st’! The middleman/collector for the tyre supply chain is Mr Otang – who collects rubber from some 200 tappers/farmers in the course of a week: These rubber harvesters are so poor that they normally would not even have a moped to transport their rubber to a collecting point. In his pick-up Mr Otang comes the side of the road near their fields to collect their rubber. What is common for tappers in both Thailand and Indonesia: The price they get is far too low to support themselves and their families through rubber tapping alone: Those who can - leave for the cities. Those who stay, have to try and find a second job in order to make ends meet.

You can find old newsletter here.